Showing up to a fancy dress party or a comic-con convention as Stephen King’s iconic monster Pennywise the clown, is certainly rip-roaring. After the recent sequel to the new IT series, people have been fascinated by the new looks of the extraterrestrial horror that dresses as a clown.

The very sight of this bizarre creature from a faraway world is something that makes us recoil in terror. That’s why many adults and kids love dressing up as this freaky character from the movies. Pennywise is a shapeshifter that changes itself to a creature that its prey’s fear the most.

As fear is what it feeds on, it intelligently contemplated that kids are the easiest to scare; so it was easy to prey on them instead of adults. Moreover, kids often fear clowns, so it chose itself to stay as a clown by default. And, boy it is a creepy one!

In this post, we share a couple of the best Pennywise costumes that fans would love to try out. These dresses are great for Halloween parties, cosplay conventions, and other fancy-dress events. We also share a buying guide to get the best costume, history behind this petrifying monster, and some popular costume ideas that you can find on sites like Etsy, Ebay, etc.

Let’s get it started. 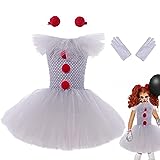 Would you like to show off your creativity by designing your Pennywise costume? Then, check out this DIY Pennywise costume tutorial, which will teach you step-by-step guide on how to create one without buying a readymade outfit.

There is a plethora of Pennywise and related costumes available nowadays. Naturally, you may find it hard to choose the right one for your needs. You will need to take care of a number of factors before choosing the right one. In this section, let’s check out the necessary factors before buying this freaky clown costume.

Brief History Of Pennywise the Clown

Stephen King’s iconic creature IT is not actually a clown, but an ancient being of pure evil, who lived for billions of years. According to the novelist, the creature is said to be present since the birth of the universe itself. IT has been known to be born from a void called Macroverse, which incorporates are universe as well. IT belongs to a faraway realm in the universe known as the Deadlights. The 2017 film showed Billy, one of the major characters, seeing IT’s true form for a moment. According to him, IT was a hair creature with orange glares, crawling endlessly. On earth, the creature is often seen in the form of a male clown by the name Pennywise. Though, in the novel you can also see it manifesting in the form of a giant female spider.

According to the novel, IT has a natural enemy – a being called The Turtle, who is also very ancient, residing in the Macroverse. IT despises The Turtle to the core, and considers itself far superior than the latter.

IT reached Earth after a fatal event, occurring millions of years ago. The creature landed in the part of North America where the town Derry, Maine has been built. IT had stayed dormant deep underground for several million years, waiting for the right time to come back on land. IT first woke up in the year 1715 when Derry was built, feeding on the fears of the town people. After feeding, it goes back to its slumber.

IT repeats this feeding cycle after every 27 to 30 years, apparently digesting all the fear juice it sucks off its victims. IT’s main targets have been children, as their fears are easily harvested. According to King, clowns are considered scary, especially for children. So, he chose the form of a clown for IT in the novel. The real Pennywise the clown was an actual person, named Bob Gray in the novel, and IT chooses Gray’s physical form with clown outfit to target its victims.

As for the people of the town, IT manipulates their minds so they ignore anything that is happening at the place. That’s why none of the adults interfere when IT attacks the children in the town. Ben, another main character from the novel, discovered in the library that IT has been terrorizing and feeding children in the town for centuries.

According to the novel, an explosion that occurred in the Kitchener Iron Works had killed 108 people, which included 88 children. Apparently, it was all IT’s doing. The novel and movie shows that the town people just add missing photos of lost children, and just go on with their normal lives, ignoring suspicions happening around Derry.

Pennywise has so many costume varieties that you will never run out of ideas for your next cosplay session. In this section, we share a bunch of popular costume options that you can choose.

IT The Movie 1990 Classic Pennywise...
Check Price
SaleBestseller No. 3

Stephen King’s iconic monster showed up for the first time on the big screen in this classic outfit. This colorful costume showed the nature of a demented clown. It was portrayed by Tim Curry in the movie that became a cult classic. If you have been a fan of the Tim Curry IT, you will love to get one of these costumes. Adding a bunch of accessories with it will further improve its quality and characteristics, resembling the fictional creature as close as possible. 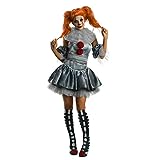 We personally find the modern Pennywise costume more frightening. Portrayed by the young and talented actor Bill Skarsgård, this Pennywise the clown is considered to be a total psychopath. His dress resembles the old Victorian period tunics with puffy collars. Even the makeup of this particular outfit is scary to make you have nightmares for days. That’s why this costume can be a perfect choice for adults who want to show up to a Halloween party or similar event as an entity to be feared.

While King’s monster has been portrayed as a male clown in the novels and movies, you can also get a custom Pennywise IT costume even if you are a female. Technically, IT’s true form does not have any particular gender. The creature keeps changing forms, so a female costume is not a bad idea. Get one of these from Etsy, Amazon, etc., and add your own touch of freaky makeup. You can find lots of options for females. Look for the one that suits you best and impress your friends at cosplay events. 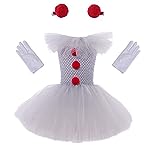 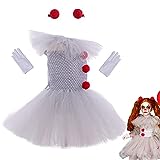 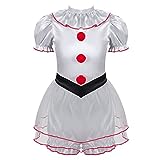 Not just adults, but kids too can enjoy becoming Pennywise the clown. A plethora of quality Pennywise IT costumes are available for children to dress up as the fan-favorite monster. You can find dresses for the classic IT or the new one, though children of the new generation usually prefer the new one. Moreover, if you do not want to invest a full costume, you can go for a customized option consisting of various accessories. 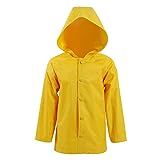 Georgie’s abduction at the start of the movie is an unfortunate and scary event that has left many spellbound. The kid’s yellow raincoat getup always reminds many IT movie fans of the tragedy that triggered the hunt for the monster in the novel and movies. We cannot bring Georgie back, but we can admire his character and personality with a Georgie costume, which is a yellow raincoat. Many fans love dressing up as him, so you might be interested in outfit too. Don’t forget to add the paper boat with the costume! You can check out a few costume and accessory options here. 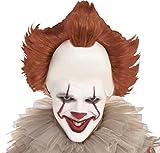 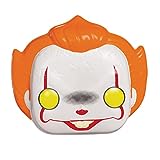 Some prefer investing in Pennywise accessories instead of a complete outfit. Getting accessories is a better option for you if you already have DIY material to design your costume yourself. Several accessories like Pennywise masks, teeth, claws, hair, etc., are available online. You can get those and create your own custom outfit to impress your friends.

What Color Is Pennywise Costume?

The primary color of Pennywise the clown’s costume is dusky gray. It does have a few colors of red and black here and there on the outfit. Beside the tones of gray and black, you will also find splashes of red, orange and cinnamon. This color combination makes Pennywise easily blend in his environment, making it even scarier.

What are Pennywise’s weaknesses?

Pennywise the clown has been shown to be weak against courage. Besides it has a weak heart, protected by its dark magical abilities. Anyone who wants to defeat it needs to have courage, and then there is the psychic battle of the Ritual of Chüd, which is required to defeat this extraterrestrial beast.

How Did Pennywise Become Evil?

Pennywise the clown is just a manifestation of the IT, the ancient evil creature. So, technically, the creature has always been evil. It’s natural character is to feed on the fears of children, create chaos, and riots to nourish itself.

Ready To Buy A Pennywise Costume

Are you ready to invest in your own Pennywise IT costume? It’s a masterpiece that you will love to try out for your next cosplay or fancy-dress event. Pennywise the clown will always be one of the top monsters that fiction has given us. That’s why it has such a huge fan-following from around the world.

Make sure to choose a costume that is comfortable, versatile, accurate, and has high-quality fabrics to ensure a good fit on your body. Also, choose credible sites to shop for this outfit or accessories so that you can have the best Pennywise IT costume ready to show off in front of your friends.

So, which character from the IT movies do you find the most fascinating? Let us know in the comments below.