One of the key concepts in the world of Harry Potter is Magic. This mysterious power that lets you do anything has led to sparking the curiosity and interest in the minds of this series’ fans. The wizarding world has been so comprehensively planned in the books that its readers want to feel a part of it themselves.

Besides the many cool and mysterious items in the books and movies, magic wands are the most obvious. These prized possessions choose their owners in the movies, giving them unique Patronus beasts and other qualities.

Naturally, fans of the Harry Potter series cannot get enough of these magical entities. That’s why they love to have a magic wand of their own. This post shares some of the best customer Harry Potter wands that you can get online at various sites.

We will also look deep into the wizarding world and understand how it all started. Additionally, we will also share a buying guide and help increase your knowledge about the cool and mesmerizing world of Harry Potter. 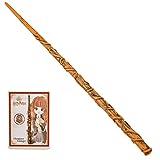 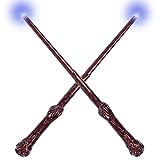 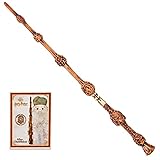 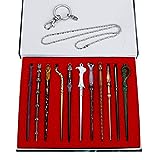 Let’s assume you want to create your own Harry Potter or some other favorite wizard/witch wand. For that, we have shared a quick tutorial video to let you experiment and create your DIY concepts.

Any Harry Potter fan will let you know that you do NOT choose the wand, the wand CHOOSES you. Unfortunately, that does not apply to the real world. So, for now, you can only get your hands on a replica wand until real magic shows up in front of the world to amaze us.

This section will share some of the key factors that you should consider before choosing a custom Harry Potter wand.

However, the real-world wands might not use the core materials like the ones above, but they can be constructed using various wood types. Wands made of wood are flexible and comfortable to hold, but they are not that durable when it comes to rough use. These would easily snap.

That’s why you will find custom Harry Potter wands made of more durable materials like ABS plastic. The way manufacturers mold this material to create intricate wand shapes is in their hands. The more detailed these wands will be, the better they will look. The Harry Potter franchise is not the first world to showcase these beautiful wands of enchanting power. Since ancient Greece, the concept has been there when Homer first mentioned it in his masterpieces The Odyssey and The Iliad. But, Homer did not use the word “wand” to represent these magic sticks.

Instead, he called them “Rabdos,” which meant rod. It was also implied to be thicker compared to modern wands. Homer referred to the wands used by Greek Gods to use various types of magic in the stories. Later, the concept of the wand was added in Italian fairy tales, where powerful fairies were depicted with these powerful tools in the Middle Ages.

In the 1700s, famous ballads like “The Laily Worm and the Machel of the Sea” and “Allison Gross” also showed the use of silver wands to show some transformation magic. This idea was taken as an homage from Homer’s The Odyssey.

In 1950 C.S. Lewis showed the use of wand by the White Witch in his popular novel about Chronicles of Narnia, which has also been awarded its film adaptation. In the 1900s, magic wands became a part of the Disney and MGM media companies, which made these artifacts quite famous through cartoons, films, and other media forms. Most of the time, these wands were used by fairies, witches, and wizards.

So, wands were popularized as magical tools that could cast spells in fantasy fiction. The writer J.K. Rowling got this idea of using wands in the Harry Potter series’s most iconic ways, eventually making these props very famous since the year 1997.

Even today, you can find several games like World of Warcraft incorporating wands as weapons of magic for players to use (Source).

Harry Potter wands have been so popular that both kids and adults want to have their hands on famous wands used by their favorite characters. Thus, we have listed some of the popular character wands you can find for sale online.

Mad-eye’s entry in the fourth Harry Potter book and film had been one of the most exciting scenarios. This eccentric Auror, who was also a member of the Order of the Phoenix, had been famous for capturing powerful and notorious death eaters. Naturally, his wand, which resembled a staff, has to be one of Moody fans’ best collectibles. Mad-eye Moody also possessed other bizarre items besides his wand. You can find them all online. 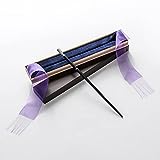 Another famous and lovable character was also Harry’s Defense Against the Dark Arts teacher at Hogwarts. Lupin was a badass werewolf, a member of the Order, and one of Harry’s father’s best friends. He can be seen using his famous wand while teaching the class, casting Patronus charms, or using it to fight enemies. The wand, which is made of Unicorn hair and cypress, is a worthy collectible if you are planning to dress as this famous Hogwarts teacher. 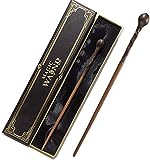 Sirius was a talented wizard, famous for being wrongly prisoned in Azkaban, a very dangerous place in the Wizarding World. Besides, Black was also Harry’s godfather and an Animagus, which let him transform into a black dog. Sirius was also a part of the gang with Lupin, James, and Peter Pettigrew. He has been a fan-favorite character. And, many love dressing up as him, with his signature thin wand, which you can buy on credible sites. 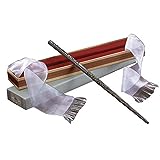 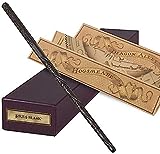 Draco’s wand has been shown and illustrated several times in the movies and books. It has been known to do notorious acts of magic, like hitting Harry during their duel in the Chamber of Secrets, disarming Dumbledore, and using the Unforgiveable Curses at times. Moreover, once Harry’s wand broke, he used Draco’s wand in the later parts of the Deathly Hallows. That’s why Draco Malfoy’s wand is one of the most sorted out ever since. 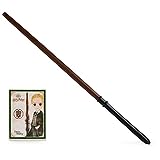 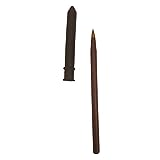 Lucius possessed a powerful wand made out of dragon heartstring and elm, which his father passed down. The signature serpent-head design it possesses has made it a fan-favorite.  Even Lord Voldemort selected Malfoy’s wand when he found that his wand was not a good match to duel with Harry’s wand. So, Lucius’s wand has been a popular one that fans are interested in getting for various occasions. 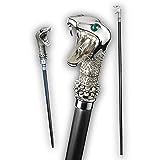 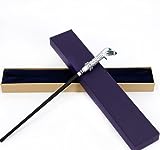 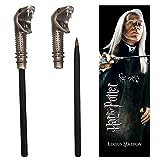 Here’s another famous wand that fans can recall for its unique curved design. Bellatrix’s wand has been famous for many events like killing Sirius Black, carving the word Mudblood on Hermione’s arm, and killing other wizards. The wand was later stolen and used during the Gringotts Wizarding Bank heist in Harry and the gang’s last novel. It’s a masterpiece that many fans love and store as valuable collectible. 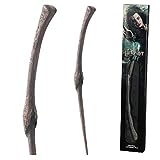 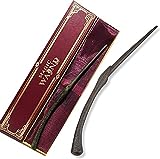 Besides Harry Potter, Scamander was also a protagonist in his series set as a prequel in the movies. Scamander is an excellent wizard who can tame magical creatures with his powerful wand. His high-end magic wand has been able to fight the likes of Grindelwald and an Obscurus, who are considered to be powerful for ordinary wands and wizards. That’s why his subtle wand is a great asset that you can get if you are a Newt fan. 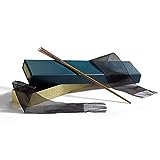 1,265 Reviews
The Wand of Newt Scamander with...
Check Price
Bestseller No. 2 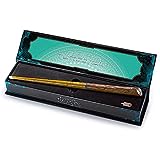 Despite being a Muggle or No-Maj, Harry’s best friend, Hermione, is an incredible witch. Her great abilities can be seen throughout the movies and books, saving the boys from an array of situations. Hermione fans love dressing up as her for comic cons and parties. So, they would need her signature wand to show up on occasions as the brightest witch of her age. 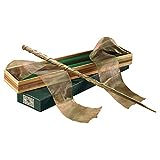 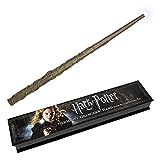 For the majority of the series, readers and viewers, including Harry, are left skeptical about this major character. Despite not knowing what his wand was created of, Snape was a powerful wizard possessing great potential. He excelled even in the Dark Arts, even though he was good at heart.

He could use non-verbal spells with his wand with ease and created the infamous spell Sectumsempra, making him a fine wizard. Snape’s wand got its immense power due to the sharp skills and intellect of its owner. So, it is a worthy collectible for Snape fans. 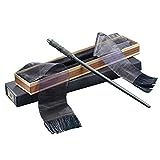 The Dark Lord possessed a powerful wand made out of the Phoenix core. The very wand that helped him create the Horcruxes by killing various wizards and witches throughout his life. This wand was made using Yew and was a remarkable 13 inches long. It might not be able to defeat Harry’s wand, as both wands shared the same core; it still was a powerful wand to have in one’s hands. 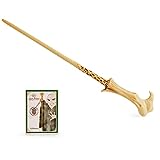 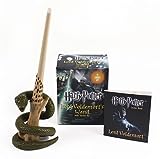 Harry Potter’s wand is one of the most popular wands. Made out of Holly and Phoenix feather from Fawkes, this wand possessed immense power to even crack Voldemort’s wand.

Both kids and adults love this wand, making it an ideal buy if you are planning to wear Potter’s costume. You can even purchase it and add it to your wizard world collection. It’s a must-have wand for any Potter fan. 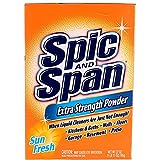 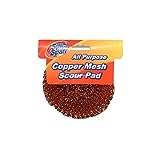 Nominated as the most powerful wand in the Potterverse, the Elder Wand gave immense power to its wielder. It has been the most sorted out wand in the Wizarding World as many famous wizards are known to get their hands on it. It was a part of the famous Deathly Hallows that were created by Death himself.

Possessing this wand made the owner feared by all automatically. Famous wizards who were known to possess it were Grindelwald, Dumbledore, Voldemort, and later Harry Potter. It’s unique shape, and beautifully-engraved artwork is some of the reasons to have this awesome magic weapon in your possession.

Possessing a magic wand is the nearest you can come to be a part of this awesome Harry Potter universe. The best custom Harry Potter wands are the ones that possess good quality materials, intricate details, decent weight, and comfort. You can get these awesome magic wands at various online stores.