A Bastard sword or hand-and-a-halfer or a hand-and-a-half sword is a type of hybrid sword that falls between a Broadsword or Longsword and a Greatsword. Bastard swords are mostly different from longswords because their design is suitable for both one and two-hand combats.

Furthermore, bastard swords have a little longer blade than longswords. However, they are still lighter in weight, making them easy to wield even with one hand. That is not possible in other bigger swords like Greatswords, which need both hands to wield efficiently (Source).

However, a lot of confusion remains considering swords and their classifications.

In the medieval period, swords were just referred to as “swords.” Bastard and other names are a more modernized way of classifying these pieces of armory. Moreover, various countries have their way of calling swords.

In this post, we will look for the five best bastard swords that you can choose to add to your collection of an armory. Furthermore, we will cover other topics about these swords to better understand its history, features, and facts. 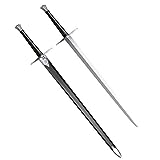 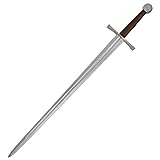 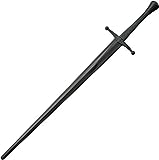 If you are a swordsmith and want to create your bastard sword for your custom collection, or if you love watching sword creation videos, check out this informative video.

The right way to differentiate bastard swords from other swords has been debatable, as there are so many features that you could find in other swords and bastard swords. However, if you are looking forward to buying one, the following factors are almost common to all medieval swords (Source).

On the other hand, genuine swords are made out of carbon steel, which is considered highly durable and strong due to the impure amalgamation of materials. Moreover, carbon steel swords are not only easier to sharpen but are also better at retaining the sharpness than stainless steel swords.

Carbon steel has a better endurance to heat treatment, an essential process for swords to maintain toughness and hardness. If real swords are easily available in your area, then you should choose a high-quality carbon steel bastard sword instead of a stainless steel one.

The geometrical point of equal weight distribution is different for each sword. Thus, it is up to you to decide the right sword that feels comfortable in your hands while maintaining efficient balance.

However, it should also be ergonomic to hold and swing, possibly if the counterbalance from the grip area is efficient at providing agility and comfort while swinging the sword.

A sword is an extension of your arm, so it should be fluid in your hand. A general rule of thumb states that the blade of the bastard sword should not be more than the length of your arm, or it can be hard to wield without tiring.

Flexibility will also ensure that it does not send residue flying in the air upon impact.

Additionally, hand made swords have a longer tip, which is designed for stabbing, just like in the old days.

If you find a cheap bastard sword, then the chances are that it is just a fragile showpiece that is not made for any kind of combat. So, invest carefully in the one that you want.

As stated earlier, swords in the medieval period were not given any fancy names. They were just categorized based on their lengths and types of handles. Bastard swords are more likely to originate from longswords because of an almost similar size and style.

Longswords were quite popular during the Renaissance periods (1350-1550 approx.), primarily between the 13th and 17th centuries. During the mid-1400s, the longsword, which required two hands to wield, was modified to have a flexible gripping style.

These swords came to be known as Bastard swords, maybe because they originated from the French term épée bâtarde. These blades had irregular characteristics with no uniquely-defined features. For instance, some bastard swords had longer handles that could be used with one hand or both hands.

Thus, it became hard to categorize a bastard sword in a one-hand or two-hand sword category. It was later in the 19th century that bastard swords were given their category. Additionally, they were offered an alternate name, Hand and a Half or Hand, and a Halfer sword.

Their versatility, toughness, and maneuverability made them a popular choice of weapon in the 1500s.

How Were Bastard Swords Made

Unlike spears, bows, axes, and other medieval weapons, swords, such as the bastard sword, requires skilled craftsmanship (Source).

The smith has to beat the hot metal piece for shaping it with a narrow piece left protruding at the end. This part is the tang that holds the hilt to the sword.

In particular, medieval knights preferred using bastard swords because of their flexibility, reach, and lightweight characteristics. These swords gave knights the freedom to wield with one hand or both hands without worrying about the weapon’s heaviness.

As a result, their blows towards enemies were concentrated with optimum strength without disturbing their balance in an actual battle.

Advantages Of A Bastard Sword

A bastard sword is known for the following advantages:

If you look back through the history of swords, you may not be able to find a specific reason why the bastard sword has been named. However, it does make sense to it as such because of the uncertainty of its origin in the past.

Plus, a bastard sword does not fit as a single-handed weapon or a two-handed one. So, it could be a bastardization of the two-handed greatsword or zweihander. But, sword terminology has always been very confusing because, at one point in time, all longswords were also referred to as bastard swords (Source).

How Long Is A Bastard Sword?

While there is no accurate depiction of the category of its size, a bastard sword’s blade is said to be anywhere between 33 inches to 48 inches in length. An additional 6 inches to 8 inches grip is also added to the end. The pommel of the sword takes one or two inches more.

The best thing about a bastard sword is that it is wieldable with one hand as well as two hands. With two hands, you can use more strength with this sword while in combat. Additionally, the hilt of this sword is designed for dual use, as it has an ergonomic grip for two-handed maneuverability.

With better control, you can swing a bastard sword more forcefully without the need for high strength in your body. On the other hand, longswords and greatswords require physical strength to control and strike an opponent.

Its flexible usability is also possible because of its thin and light construction. Thus, it is a skilled weapon for thrusting an opponent in battle, similar to lancing. That’s why it was one of the most preferred choices of weapons among medieval knights.

Ready To Buy A Bastard Sword?

Despite the bizarre and infamous name, the Bastard sword has been able to gain a reputation for being one of the most tactical medieval weapons. That’s why many sword collectors feel immense satisfaction at owning one of these beauties.

This sword’s true characteristics are still a mystery, but that mysterious features make it a worthy weapon. You can refer this guide to look for the best bastard swords forged by skilled bladesmiths and craftsmen.

Make sure to check for rules and regulations in your area regarding possession of weapons before purchasing one.